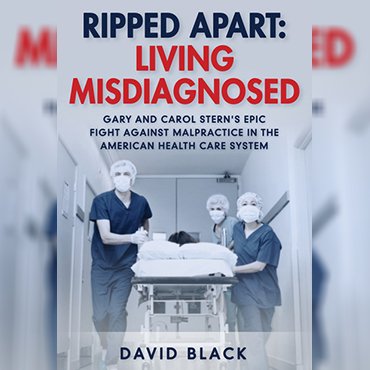 Ripped Apart: Living Misdiagnosed, by critically acclaimed author David Black tells the story – Gary and Carol Stern’s story – of the one of the largest individual medical malpractice awards in America. It describes in detail what it is like to suffer due to doctors’ mistakes and their refusal to admit they made erred. The gritty – sometimes gruesome – detail is important because (as in the movie M*A*S*H) the reality of what Gary and Carol Stern went through reflects what many people experience but are afraid to discuss. A silence that prevents others from revealing what they have experienced in American hospitals – in which 50% of the patients in hospitals are there due to being in a hospital. A silence that prevents the country from frankly dealing with the health care crisis we face.

Gary Stern spent three years with his internal organs on the outside of his body. This book is not a polite narrative. The book describes what suffering is like in stark detail and how American Health Care fails. It also describes, despite their medical misery and dramatic, landmark legal case, the love story Gary and Carol shared; it is a story about love overcoming the horror they endured.

Carol Stern and author David Black are now telling this story about their collaboration and hope that their message resonates with others who are in similar situations. Books will be sold at major retailers across the USA, along with Amazon and Barnes & Noble. To preorder the book visit www.skyhorsepublishing.com.

The book will be released on June 22 online at Amazon.com, BarnesandNoble.com and retailers nationwide.